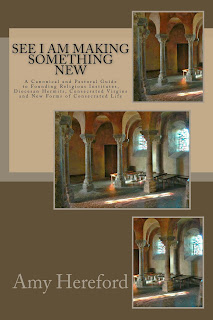 My latest book was released, and as anyone who has been through the process knows, it takes forever. However, this one took extra long, so despite the optimistic title: something new seems to be a wee bit stale by now. Nevertheless, I'm glad to have it out.
A few years ago, I organized a workshop for canon lawyers on these topics. This book is a further development of those materials.

See I Am Making Something New by Sister Amy Hereford, CSJ is a pastoral - canonical guidebook that explores the various ways in which the Life of the Spirit is stirring anew in the Church today in new religious institutes and societies, in diocesan hermits and consecrated virgins, in the new forms of consecrated life, and in the ecclesial movements that bring life and vitality to the Church today, and in fact, may also give rise to new institutes. The book is a guide for those discerning their vocation and their spiritual directors and a pastoral manual diocesan personnel.


God moves among us in holy creativity. This book explores they ways in which God is "making something new," in new religious institutes,in newly re-introduced individual forms of consecrated life, the diocesan hermit and the consecrated virgin, and in the new-forms of consecrated life. May we each have the wisdom and courage to live our vocation, and may we love and support each another as we follow our unique vocation, our unique path in the heart of God.
Available on Amazon and Kindle, you can check it out here.