Giving Voice to the Importance of Peers

Musings of a Discerning Woman: Giving Voice to the Importance of Peers: Me with some of my GV Sisters at our 2013 National Conference Regular readers of the blog know that I am involved with (and presently o...


I can see more and more how my life as a Sister of St. Joseph of Peace will be strengthened and supported by my Giving Voice peers across congregational lines well into our shared, if unknown, future. When I dream and pray about the future of religious life, I know what I knew at that first retreat as a novice. My Giving Voice sisters and their passion for God, life, religious life, and their own communities will help create that future even as we live it now. God is in the mix, and all shall be well.

Thanks Susan for sharing your experience of life and your wisdom with us. 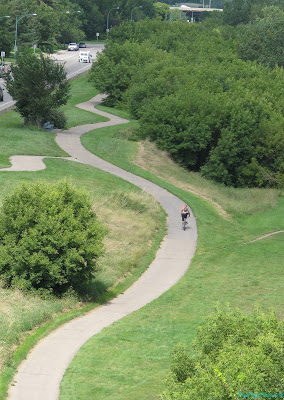 I share a beautiful reflection by a younger sister on the importance of community living, and respect for differences in community.

Holding the Earth as a sacred trust commits us to asking how our decisions and behaviors impact the Earth community. We commit ourselves to simplify our lifestyles through our consumption and waste. Practically speaking, we can actually cut our expenses and resource footprint in half by living in community. The environmental impact of choosing to live singly over group living is huge.

We have committed to deepening our living and contemplation of consecrated life. Part of the radical nature of our lives is the witness of living together in community. Our world, especially in the United States is becoming more and more individualistic. We buck that in living together, in choosing the challenges of rubbing shoulders and the communication and understanding that it requires over the ease of living singly.

I see living with others in community as a way that I consciously work towards radical Gospel living on a daily basis. It gives fruit to my prayer, contemplation, and theological reflection shared with others on a daily basis as we pray together. It helps me enter more deeply into the mystery of God as expressed in the diverse and emerging theologies and spiritualities taught and shared with me through those with whom I live. It helps me explore and act upon what it means to be a collegial Church. Living in community helps me take ownership for, join in, and keep generating rituals that reflect the experiences of women and people of diverse cultures. I cannot tell you of the prayer and ritual experiences to which I have been exposed living with our sisters and those who live with us. Living with others calls me to transform my world view and educate myself in ways that challenge my world views. Stories of mission and of the people with whom she worked on the edge are a nightly education that I wouldn't get if I lived alone.

I know that not everyone in my community is looking for this kind of community, but this is my experience and my desire. No experience is right or wrong. They just get us to where we are today and help us make decisions about where we will go tomorrow. Our experiences are different, how we hope and intend to live this life is different, our definition of community is different, etc. I believe that we hold many similarities, or we would not have made the same vows in the same community. It is my hope and my joy that we can honor and support one another, even as we lived our shared vocation in different ways.

I would like to invite Pope Francis as a guest blogger.... For this post, I take just a few quotes from Pope Francis' words to the Union of Superiors General of Men's Religious Institutes. Links to articles below.

Wake up the world! Be witnesses of a different way of doing things, of acting, of living! It is possible to live differently in this world. We are speaking of an eschatological outlook, of the values of the Kingdom incarnated here, on this earth. It is a question of leaving everything to follow the Lord. No, I do not want to say “radical.” Evangelical radicalness is not only for religious: it is demanded of all. But religious follow the Lord in a special way, in a prophetic way. It is this witness that I expect of you. Religious should be men and women who are able to wake the world up.

Thank you!!! It is so difficult to talk about religious life and maintain a high theology of Baptism, which call everyone to radical discipleship. Religious men and women have the privilege of living this radical gospel living in a particular way, "in a prophetic way," in a way framed by vowed life in community.


I am convinced of one thing: the great changes in history were realized when reality was seen not from the center but rather from the periphery.

This reminds me of the mark of New Monasticism - Relocate to the abandoned places of Empire. This is the deliberate choice to move out of positions and places of power, downward mobility, the choice to live with and for the lowest and the least.


Introduce persons of various cultures into the central governance of the Orders and Congregations, who express divers ways of living the charism.

This is an invitation for the central governance to represent not just the dominant culture, even the dominant age cohort. It should also represent all the view points, even the younger cohorts who have distinct perspectives and abilities to meet the culture of today.

Asked about the balance between community and ministry, the Pope pointed to the experience of Taizé. Despite their ecumenical diversity, they live a parable of community. Their community is itself their witness, their ministry:


They all live a real life of community together. They are an impressive apostolic role model for young people. The religious community has an enormous power to call people together.

Regarding formation, the Pope said that


Formation is a work of art, not a police action.... To avoid problems, in some houses of formation, young people grit their teeth, try not to make mistakes, follow the rules smiling a lot, just waiting for the day when they are told: ‘Good. You have finished formation.’ This is hypocrisy that is the result of clericalism, which is one of the worst evils.

The whole issue of formation is in need of some serious re-imagination. Too often, we are still forming for the 1990s or earlier. We have to ask what religious life is today, and what do we need to bring new members into religious life in a way that is life-giving. I have seen too many young people come to religious life with joy and enthusiasm, then after 5 or 10 years, the light goes out of their eyes. They still believe in their vocation and in religious life, but too often we are not able to "fan into flame" the gift of God within them. This is what I see as clericalism in women's communities as well as in men's. The Pope's words ring true.

The charism is not a bottle of distilled water. It needs to be lived energetically as well as reinterpreted culturally. But in this way there is the danger of making a mistake, you say, of committing errors. It is risky. Certainly, certainly: we will always make mistakes, no doubt about it. But this should not stop us, because there is the chance of making worse mistakes. In fact we should always ask for forgiveness and look shamefully upon apostolic failures due to a lack of courage.

I re-commit to this risky business of living religious life, of daring to live simply, contemplatively, prophetically. And I invite others to wake up! and join the adventure!