Out of the Convent, Into the Street 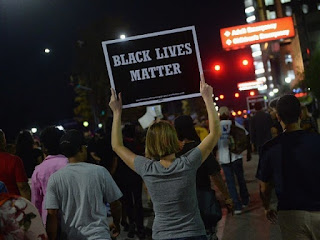 The people of St. Louis are trying to process another not-guilty decision in another police shooting that left another young black man named Anthony Lamar Smith dead. I thought I was ‘woke’. I thought I 'got'  racism, as much as a white middle-aged woman could. And for this reason, I took to the streets.
On the one hand, I saw amazing moments of solidarity, community and grass roots work by blacks and whites and everyone in between. Keisha Mabry wrote a piece entitled 25 Magical Moments From The Anthony Lamar Smith Protest. Yes, yes, and double yes. I as a middle-aged white woman thought I was seeing this. I am so glad that Keisha named it so well. We are so far ahead of where we were in Ferguson just three years ago, though in truth, we have many miles still to go.
In Ferguson, we heard, we saw, we experienced, we cried, we raged, and we all went home, and many of us came together to try to do our homework. I went to groups where we talked about white privilege and how to address it in the white community. I learned about unpacking my own racism and how to begin being a better ally to my brothers and sisters of color. I wasn’t sure it was making a difference, but my brothers and sisters of color assured me this would make a difference in their lives.
I come back to the streets in 2017 much more prepared. And I think the black community was doing its homework as well. We come back to the streets organized, determined, ready to do the work of justice with the sometimes awkward, partially-woke white community. And the result is the magic we are seeing on the streets.
The police did their homework as well, but the narrative they were working from was how to quell a riot. Well, this is not a riot – this is a peaceful assembly with a clear and persistent message. The people show up: people of color, people of all colors and people of no color. We peacefully assemble, we speak freely, we petition the government to address our grievances, and it’s protected by the constitution which forbids:


…abridging the freedom of speech, or of the press; or the right of the people peaceably to assemble, and to petition the Government for a redress of grievances.

We are doing something fundamental to the very existence of our democracy. And the police show up in riot gear with tear gas, pepper spray, zip-ties for mass arrests, and riot guns. So the crowd chats:


I don’t see no riot here.
Why are you in riot gear?

The crowds, a few hundred strong are peaceful, collaborative, disciplined and proud.

At one point when I was out on the street, the group was gathered and chanting. Earlier in the day, the police had interrupted an otherwise peaceful protest and started indiscriminately arresting people. So we gathered outside the jail where they were being held. We marched around the area a bit.
I wanted to move outside the group and onto a nearby sidewalk to join a friend. In order to do so, I had to cross a police line that was forming. The officer in semi-riot gear said I couldn’t cross. What??? I told the officer I wanted to join my friend on the sidewalk. He said he had orders not to let anyone out of the group. What??? I asked “Am I being detained?” – knowing that he would have to articulate reasonable cause to suspect me of something. He said he would have to ask his sergeant. They ended up letting me go. But I’m a white middle-aged woman, and the first cop could have been my grandson.
No one was arrested in the action – but only because the protesters kept their cool, kept on message, kept strong and kept together, in the face of aggression from law-enforcement. I repeatedly see the elegance of their planning, organizing and actions. And by the grace of God, they elude the threatening officers.
Walking away from these actions, I am every more ‘woke’ to the brutality of racism. I can go to a protest or stay home. I can walk across a police line on the grounds of my race. But my sisters and brothers of color can't leave their race at home and breath the freedom I live - even just for a day.
Now I must say, that some officers have been courteous, fair and restrained in some tough situations. I thank them for that and I thank them for the many ways they serve and protect the community. At the same time, it is clear that the police have an element of brutality in their midst. These departments have clearly trained to quell riots. But they seem unable at times to distinguish between a riot and a peaceful assembly protected by the constitution.
I heard an officer report on his radio that a dispersal order had been given, when there was no dispersal order audible. I was close to the officers and the crowd and heard no such order. However, shortly thereafter, squads of riot police appeared on the scene. Why was that report given, when it was clearly wrong? What is wrong with this system? I hear the protesters’ chant, and I seem to see it validated:


The whole damn system is guilty as hell.

I see my brothers and sisters of color who have lived with this system day in and day out, year in and year out, decade after decade. I’m only beginning to see what they have lived with for a lifetime, and too often for a lifetime cut short by violence. My heart is breaking.
I turn to the men and women in blue. In another day, in another place, we walk the streets together, we do festivals together, we pray together in the same churches. Can we talk? Can we talk about the magical moments that are happening on the streets. Yes, sometimes the police protect the crowds as we come together to link arms and build the beloved community. Other times…. there is something powerfully and painfully wrong. And I believe that we can come together. Violence isn’t the answer.
–Sr. Amy
No comments: 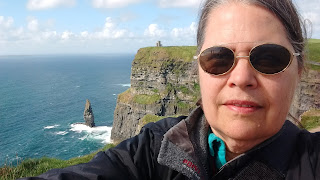 Attorney and canonist Sister Amy Hereford combined work and pleasure this summer on a whirlwind trip that took her to Rome and across Ireland for six weeks. In Rome, S. Amy participated in an international canon law conference and other meetings before heading out to Ireland, where she met up with travel companion Sister Mary Louise Basler. Her work continued as she facilitated meetings and workshops with congregations of women religious in Ireland. Read about S. Amy’s recent journey and the cultural influences she experienced.
Q: How did this trip come to be?
A: It started when a community in Ireland invited me to come for a reflective workshop on the future of religious life. After that invitation came, another group invited me to work with them in Ireland. Since I would already be there, I said yes to them too. I also needed to attend some meetings in Rome and the canon law conference was in the same timeframe. It just unfolded piece by piece.
Q: What has impacted you the most from your experience?
A: The differences in the ways people think and believe shapes their culture, and I loved learning about these differences, because talking about the future of religious life and how it unfolds is impacted by culture. Having time to do some traveling, talk to sisters, learn about the similarities and differences in cultures and their experiences has been so rewarding. I learned so much about how the lives we live are very similar, even when our cultures differ.
Q: What was your favorite part of this trip?
A: When you walk down the streets here in America you pass a Taco Bell, a post office, maybe a coffee shop. When you walk down the streets in other countries you also pass a Taco Bell, a post office, a coffee shop, and then a giant castle. The history is so embedded in the culture, that eventually you think “Of course there’s a castle there.” The difference in culture was evident, yet there were also so many similarities.
Q: Were there any challenges you faced through this experience?
A: Because I have talked about the topic of the future of religious life before, I understand that each group is different. I can bring insight which can bring people together. But when I start to talk about the future, each group has something they specifically need to hear. It’s challenging to know what this particular group needs to hear, what insights it needs, what will spark their hope and their imagination. For me, it is a humbling challenge of asking God to work through me, and to allow these people to hear what they need through what I say.
Q: What’s next for you?
A: Right now, I am teaching a course at the University of Dayton. I continue to write, speak and reflect on the future of religious life; every time I have a conversation I gain new insights. When I present, people bring up things I may not have realized or thought about before. There is also more
writing coming for me. There is a possibility of another book and a few articles.
Q: What takeaways did you gain from this trip?
A: I continue to sit with the particular situation of a local church, and the ups and downs they go through. It makes me realize even though different churches in different places will have different challenges and different situations, they are still similar. There is a connection; no matter how different the underlying issues might be, we are all facing these things together. Making connections and building relationships plugs me into the global evolution taking place in religious life.
No comments: