What if the Year of Consecrated Life ushers in a new graced time for religious, a kairos time, a time of vitality, hope and vision, a time that addresses the cries of a twenty first century world? This is one of the many possibilities that Australian Sister Sue McGuiness rsj recently hoped for the Josephites, and we at CRA echo these hopes for the benefit of all religious.

In his call for a year dedicated to Consecrated Life Pope Francis said it was his hope that religious sisters, brothers and priests would “wake up the world” with their testimony of faith, holiness and hope.

Quite a challenge! As religious, as Sisters of St Joseph, we can choose the nature of our response to the Pope’s challenge both personally and as a Congregation.

What if… during this special year we made a gesture of radical gratitude for the gift of religious life to the Church and to the world in a spirit of humility and openness? Cardinal Joao de Aviz, prefect of the Congregation for Institutes of Consecrated Life, outlined his own hope, “In this year we want to recognize and confess our weaknesses, but we also want to show the world with strength and joy the holiness and vitality that are present in consecrated life.”

What if… during this year Josephites around the world, more than ever before, ignited hope, deepened our own sometimes fragile faith and gave prophetic witness to others of lives lived in solidarity with those on the margins of our communities?

What if… we modelled a life of simplicity which spoke loudly to a consumerist world that we have a responsibility to pass on to future generations an earth that can sustain its population in peace so that everyone has access to fresh water, sufficient food, adequate shelter and the liberating power of education?

What if… our stance as women religious offered solidarity and support to our trafficked sisters, and all those women and children whose rights and dignity have been negated by oppressive, brutal treatment?

What if... we took seriously the words of Pope Francis: “…religious follow the Lord in a special way, in a prophetic way. It is this witness I expect of you. Religious should be men and women able to wake the world up, and (show that they are) a special breed who have something to say to the world today.”

What if… our lives in community were tangible signs of unity, of oneness and of connection, with each other, with all created things?

What if… the Sisters of St Joseph were able to indulge ourselves a little and glance over our shoulders at the conclusion of this special year to identify some real ways in which we had answered Pope Francis’s challenge? Pope Francis described his own yardstick by which we can measure the quality of our response: “I’m reminded”, he said, “of those religious who have a heart as sour as vinegar: they are not made for the people. We must not create administrators and managers but fathers, brothers and sisters, travel companions.” Pope Francis exhorted us to develop a “tender heart.” He writes, “I want to say one word to you and this word is joy. Wherever consecrated people are, there is always joy!”

We are being invited to revitalize ourselves from the ‘inside out’. We are being challenged to demonstrate such a passion for life that we become, as Joan Chittister puts it, “living displays of the vibrancy of the Spirit for which we are all baptized,” and for which we religious are consecrated.

The conclusion of this special year in Advent 2015 coincides with the promulgation of the 50th anniversary of Vatican II document on the renewal of religious life, Perfectae Caritatis.

And what if that time was lived out by Sisters of St Joseph joyfully, hopefully and effectively?
1 comment:

Email ThisBlogThis!Share to TwitterShare to FacebookShare to Pinterest
Labels: Year of Consecrated Life

Even in the midst of the insanity of war, human beings are made of finer stuff than we show. This is a story that says we can do better and we are doing better, even if it's only in fleeting moments. Let's tap into the best of ourselves and live from that.
I believe that Religious Life is an experiment in this commitment to tapping into all that is finest in the human spirit, into the Godliness of the human spirit. It is an experiment in forming communities where we can support one another in this. It is an invitation to nurture spirituality and community among ourselves, and to share that richness with the poorest and weakest around us.
Peace,
Amy
No comments: 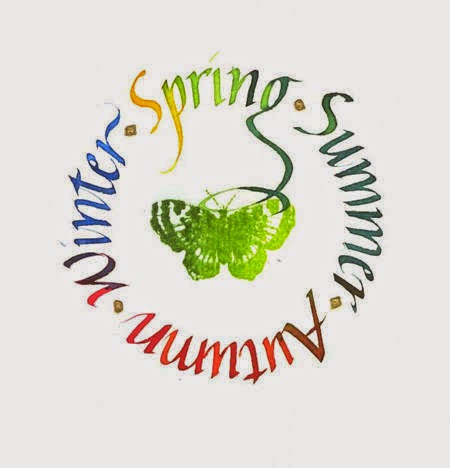 This morning's prayer called me to open my eyes to what was around me. Looking out the window, I saw the frosty remains of the garden and trees. The overnight frost had taken the last of the green growth and everything was frozen and wilted.
Then in the next phase, the prayer called me to see God in whatever I saw - after all God made it and cares for all of creation. Even the leaves nipped by icy winds are made by God and loved by God. The yearly cycle of seasons brings an end to growth as the winter sends us indoors to huddle together around the hearth till the spring.
It is not hard to see the image of God's love for us in religious life as the twilight of life calls yet another sister home to God. Yes, God is in the coming and in the going of each of us. And in this circle of life is also a hope just as there is a hope in the seasons of the years.
No comments:

Sisters 2.0 is a movement of the new generations of women religious. In this peer-led, self-organized space, we network for visioning and fostering future oriented initiatives for religious life. In the spirit of Giving Voice, we embrace our diversity, listening attentively, speaking with intention, and tending to the good of the whole.

New Generations - We feel the need for creating spaces for conversation where we can share the experience of the new generations of women religious in today's communities, today's church and today's world. Some decades back, women religious in their thirties and forties gathered to create a space for 'giving voice' to their experience, and today, Giving Voice is respected national organization that supports hundreds of younger women religious through national conferences, retreats and networking online and on-ground.
The generations who founded giving voice have 'aged out' of that organization which invites women under the age of fifty into its conversations. At the same time, many in this founding generation feel the need for continuing conversation. We have been gathering for a few years in self-organized circles to describe this experience and to imagine and create the forum that will help to support us at this stage. Sisters 2.0 emerged from this process.
We generally describe ourselves as the generations of sisters born after 1955. Boundaries are hard to draw, and some born in the early fifties may believe this is their conversation, and they are welcome. Older sisters can be allies for this movement. Giving Voice remains the place of choice for the youngest generation of sisters as the seek to give voice to their experience and support one another. At the same time, those sisters are welcome to join Sisters 2.0, and join in this new conversation as it suits their needs.
Visioning and Futuring - Sisters 2.0 is a place for engaging in conversations about where we are today in religious life, and where we are headed. Many of us are having similar conversations in our home communities, and this are immensely important conversations. We also feel the need to engage our peers on these topics. Our vision and our view of the future are influenced by where we stand. We stand with our sisters in our home communities in many respects, and we stand with our 2.0 sisters in other respects. We value opportunities to move in and out of congregational circles, and to move in and out of peer-sister circles in mutually supportive ways.
Future Oriented Initiatives - Sisters 2.0 is a support network and it seeks to move beyond conversation into actions that will actively engage the evolution of religious life and its vitality into coming generations. Many of our congregations have an average age in the upper seventies, or above. We are sadly, yet gratefully, bidding our last farewell to many of our sisters as they go to God. At the same time, our hearts are burning within us as we feel the call to live our lives to the full and to re-imagine religious life and begin to re-build it. It is this second task that is the focus of Sisters 2.0.
Listening, Speaking, Tending - We create sacred spaces to listen to God, to one another and to those around us. We speak our truth honestly and respectfully. We attentively care for the good of the whole, trusting in the Spirit who has called us together.
Join us - If you are part of the new generations of sisters, there are a number of ways you can join us.
So often in this description, I found myself writing "at the same time".  We are in our communities - at the same time - we engage intercommunity circles. We face the current decline in numbers - at the same time - we respond to our call within this reality. We hold many things in balance and in tension as the Spirit of creation hovers over us, creating and recreating and renewing the face of the earth.
No comments: