Thanks for this from Juliet Mousseau:

In the past months, the theme that keeps finding me is vulnerability—but not necessarily as a bad thing.  How can that possibly be?  It first found me when I read an article by the English theologian Sarah Coakley, who spoke of prayer as vulnerability.  She explains that she herself was transformed by her prayer.  Her silent prayer allowed God’s word to work in her, to transform her understanding (as it so often does, if we only let it)
Vulnerability requires us to relinquish control.  We risk losing what we have and facing something completely unknown.  We want God in our lives, but in a way that allows us to do the planning, to control the relationship so it suits our desires.  It doesn’t always work like that, though God certainly wants us to be our best unique selves and to be happy.  In our relationship with God, we are not in control.
But, really, we do not control any of our relationships.  Each one of them must be a place of vulnerability, where we open ourselves to be known and changed by another person.  We do that daily with the women in our communities by sharing our lives with one another.  We love our sisters, and in loving them, we allow ourselves to be shaped and transformed by them in unexpected ways.
Whether we like it or not, religious life is in a vulnerable state right now.  It’s not specifically about aging populations or that horrible word, “diminishment.”  Instead, our vulnerability now lies in our uncertainty about the future and our lack of control over what will happen.  When we can fully embrace that, when we can be fully open to our places of vulnerability, then God can work freely in us.  God can and will transform religious life in ways that we are incapable of imagining.
In this month of November, we take time to give thanks for all the ways that God has touched our lives and provided what we need.  We remember the gifts we have been given – the food on our table, the love of our families, the companionship of our sisters, our good health and moments of healing.  These are our memories of God’s fidelity to us, a way for us to strengthen the faith it takes to become vulnerable again and again, to God and to the people we care about.
May we allow God to work in our vulnerability, creating anew religious life for a glorious future.

The Beguine movement began with medieval women who devoted themselves to prayer and good works at a time when many men were lost in wars and in the Crusades. This left many single women and widows. Some entered convents, however, each convent had to be under the supervision of men's monasteries, and some men's communities refused to take on these responsibilities. And some women might not have been drawn to the strict cloister; some families might not have been able to afford the doweries required at the time.
Women began to take up a life of prayer and service independently. The movement was an attractive option in the particular historical context. The women lived alone or in small groups, and as more gathered, they formed villages of beguines with loose organization.
The brick and mortar evidence of the movement are these villages, called Beguinage in French or Begijnhof in Dutch, which are more or less extensive villages of small houses where the beguines lived. The homes are surrounded by a wall with an entrance gate. No men were allowed in the Beguinage which was organized and governed by women. Most of the Beguinages had their church, some had several churches. Some also had a school house or a house to take care of the sick, or the elderly, though not a hospital in the modern sense. Rows of houses lined narrow streets of their medieval villages.
The movement began in the 11th century and spread rapidly throughout the Low Countries and eventually reached across northern Europe. Some of the villages had nearly a thousand women living in them.
The women did not profess vows and they had no unifying rule. Instead each Beguinage developed its own style of life and of government. For example, some Beguinages welcomed only women from the higher classes, others were open to women of the lower classes. These local rules were characterized by moderation and pragmatism. The literature from the time indicates that the beguines practiced voluntary poverty in which they avoided riches, but also avoided destitution. Their witness was a striking contrast to the riches of monastic foundations of their day and to the pomp of ecclesiastical lifestyles. The implicit critique of their lifestyle along with eclecticism of some beguines provoked the ire of clerics of the day.
Beguines also developed a characteristic spirituality which I will examine in succeeding posts.
8 comments:

Simple lives: a new beginning for the Beguines?

I ran across this article from Commonweal from 2009. I missed the original publication, but I would like to respond now.

While I was studying theology and canon law, I had the opportunity to live in Belgium for a few years, It was a great opportunity on many levels and I really appreciate my time there. 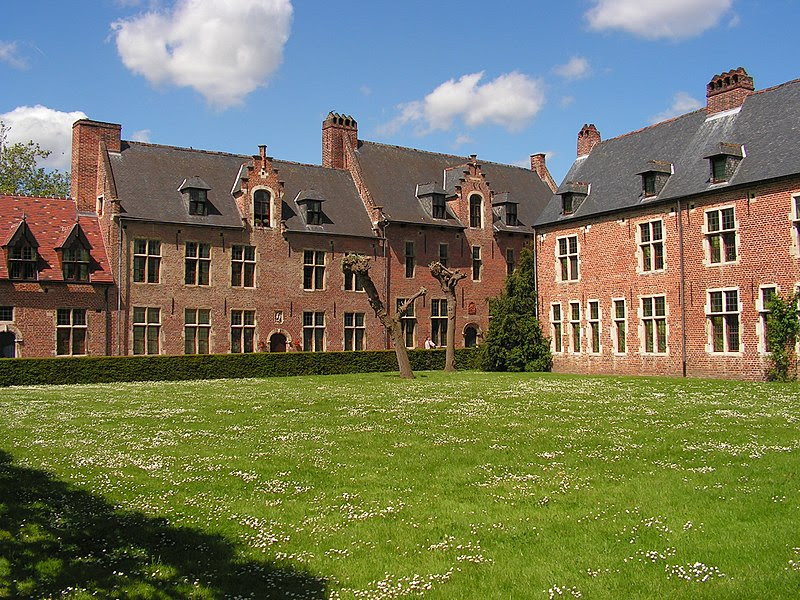 One of the great privileges of that time was the opportunity to become more familiar with the Beguine movement in its native region in the Low Countries. In the area where I lived each town had its town square, church, city hall and beguinage (begijnhof). The images here are from the Grote Begijnhof in Leuven where I lived. They are the brick and mortar remnants of a movement that lasted nearly 1000 years, spread through much of northern Europe and influenced life and spirituality at the time. Writings of Beguines continue to influence spirituality today.

The essence of the life of the beguines was women who devote their lives to good works, quiet contemplation and living out their spiritual values. They found that a loose community structure enabled them to support each other in an era where single women were quite vulnerable.

With this post, I begin a series on the beguines, their historical reality, the current resurgence of the movement and what this all may have to contribute to the conversation on the future of religious life.

Anyone who would like to contribute to this series, let me know and I can put your post into the conversation.

Nuns Not On The Bus

Sisternews passed on the link to this story from Religion and Politics:


Nuns Not On The Bus

For the Dominicans, Catholicism functions as a boat, one with high walls that protects and carries you, while for the Sisters of St. Joseph, the church is a life jacket, something that travels easily and lets you look around. But although they use their religion in different ways, the nuns were all among the best people I had met in a long time. They were smart, cheerful, and authentic, not vain.

And brave. Sisters in both congregations told me their parents were shocked by their decisions—even those who became nuns back in 1960, when all good Catholics were supposed to want to give a daughter or a son to the church. At least for a middle-class girl from a proper New England town, whether Sister Jane or Sister Anna, it was always unusual to commit so much to the church. It was never an ordinary calling. Even those nuns who eschew left-wing politics are radicals indeed, for in our age it has always been a bit radical to be a nun.... Read the whole article.
I found the article to be refreshingly balanced and insightful. The author visited two groups of sisters, one main-stream group: the Sisters of St. Joseph in Holyoke, MA, and one habited: the Dominican Sisters of St. Cecilia. Both groups have found a way to live the Gospel in a radical way. I would like to explore a story that is hinted at in Mr. Oppenheimer's piece, but is not followed up: "each wing of American sisterhood counts about 500 women in the multi-year process of becoming nuns."

So where are these 500 new women in the "wing of American sisterhood" represented in the article by the Sisters of St. Joseph? They are here, they are living the gospel in a very conscious and deliberate way. They are living in communities where the median age is nearing 80. Those of us who have entered our communities in the last 25 years are beginning to find our distinctive voice and to explore our future together. I think this is the group to watch as we enter into dialogue about the future of religious life and radical gospel living.

Giving Voice represents the younger part of this cohort. The older part of the cohort has yet to find its own place, although this blog is an attempt to do that.